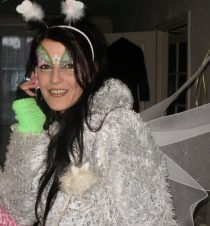 Born Kelly Holmes in Essex September 1977 only daughter to Philip and Sandie. Kelly has two older brothers and enjoys having an extended family with nieces and nephews and 3 children of her own a teenage son, teenage daughter and a young toddler son. Kelly recently got married to her soul mate hence now making her a Port. Having spent most of her adult life as a single parent to her two older children, Kelly decided to persue her passion in writing and in 2004 wrote the first book in "The Jewel of Dahleigh" series, which she hopes will consist of 5 main books.  Writing the first book took Kelly on the most amazing personal Journey. She always had a fascination in all things mythical and magical so this genre of book was where her heart lied, the book had been in her head since she was a little girl and finally she decided to get it to paper. Kelly tried for a short time to get her first book published but with the likes of J.K Rowling being in the height of her career it was difficult so she took the decision to hold off for a while and keep her book tucked away. But like most busy mums, life got hectic and children grew into demanding teenagers, Kelly started working for a local charity dressing up as a fairy and she also met her husband. So the book became a "on my to do list" Until now. Kelly's new husband asked to read the book and after reading it encouraged Kelly to continue with her journey which brings us to this very day. For Kelly Dahleigh is being re born and book two is being written but for the reader the Journey is only Just beginning.